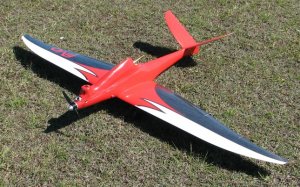 "A cockpit or canopy profile must be evident and capable of enclosing a dummy pilot's head 50 mm from
the chin to the top of the head. The canopy need not be transparent and a dummy pilot’s head need not
be fitted." 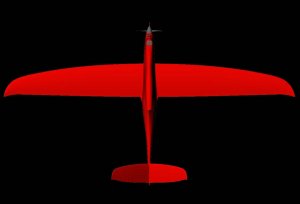 Bruce DeChastle had unveiled his latest weapon, seen in the foreground of the picture below. It was fast, unconventional, and rule bending - with wheels in the wingtips and one single central wheel in the fuz. Also a v-tail! This plane flew awesome until Bruce lost a prop blade in practice. 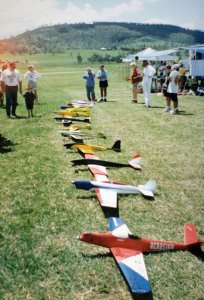 I must tell the story about that plane.. After Bruce had his prop-blade loss incident, the airframe sat about the pits for a while, looking a little worse for wear but in tact. A flying buddy of mine and I decided we wanted it and offered Bruce some cash for it. We bought the plane, and took it home complete with Bruces' engine (which we had to send back without opening the crank case as Ranjit Phelan had done some secret squirrel modifications or something like that..) - The plane became a sports pylon model (such a sad fate for a cutting edge, FAI design, from what I know a one off DeChastle plane) - and I have no idea where it is today or even if it still survives. I was eventually bought from me by another friend who I have not heard from in over 15 years.
Zum Vergrößern anklicken....