First of all, this will be just a “personal point of view” report, a shared experience (too good not to be shared) and not a report on the CUP and Eurotour competition held at MFR, Tortosa, Spain in October 2016. There are much more qualified people to write about the competition itself in a perfect manner and I am eager to see it published and enjoy the read also.

Being a couple of active sailplane modelers for quite a few years (or decades should I say) and living in the Canary Islands and thus “semi isolated” in our hobby, we decided to give a try at a GPS Triangle event in order to know first hand other modelers, pro and not pro alike, learn skills and different tactics as all we have done by now has been by self experimenting and reading here and there and some, but not much training and no experience at all in this type of events and competitions… We choosed Tortosa October event which included a GPS Cup and also an Eurotour event with absolute top pilots inscribed, quite a perfect goal for us as it was in reach with a direct flight to Barcelona followed by a 150Km car trip.

Francisco (from now on Paco) had his Thermik XXXL with him and SM/Jeti hardware on Android Skynavigator app, and in my case, having lost my Mistral 4900 in a speed round mishap one month prior to the event, I was lucky enough to have Ueli Nyffenegger’s (TUN) invaluable help in getting an almost ready to fly and brand new Skywalker XL delivered in Tortosa at arrival. Hardware was Wstech vario and GU/Jeti/Android Skynavigator.

Not everybody is able to put a 1:3 or SLS class together or to transport it unless he can go by road which most in Euland did in a trip, so, Sport class was an excellent idea, both because of cost involved and also due to transportability by regular airlines, and thus our reason to prepare well in advance the trip... Long live the Sport Class!!! :-)

A 3 hour flight from Tenerife to Barcelona and a 90 minute car trip from Barcelona Airport to L'Ampolla coastal villagewhere our Hotel was awaiting us. Enough time to have a nice lunch and starting our (half an hour) trip to Model Flying Ranch. At arrival the sight was breathtaking, we were like little boys in a sweet store; quite a few modelers already flying and dozens of big scale gliders parked just a few meters away. Straight on, we met Ueli Nyffenegger and also the local Club del Ebre club President Pedro Belenguer; both made us feel to be at home from the first minute, both and everyone else nice and helpful, quite a nice welcome experience. It was time to get hold of the new Skywalker which was awaiting in the hangar. We spent the couple of remaining light hours setting up and programming the model, a quite straightforward operation thanks to the well in advance prepared model by the TUN team. Time to go back to our hotel and have a good rest.

Early morning and a good breakfast before driving again to MFR. We spent the first full flying day (sun Oct 2nd) maidening and adjusting the SW in order to start the CUP flights. Flying conditions were nice and this 1st day we got a 9 triangle flight at lunch time, nice start. Lot of programming and CG work was done and also tried to learn about local flying conditions. On monday, quite a few flights wer done with both, the Thermik and the SW, but it was not till sunset when some extraordinary weather conditions showed up and a full 15 tringles flight with the Skywalker could be uploaded for the CUP. At this time only three pilots were aloft, the rest having a very nice dinner at MFR facilities. Needless to say that this flight paid for the whole week. The team was working fairly well if we take in mind the lack of experience. Conditions varied a lot, allowing 4 6 or 8 triangles per flight, but usually mid day they improved quite a lot and much better flights could be achieved by the experienced pilots.

Another aspect for us was the pleasant experience to meet people that we knew beforehand only through their www pages, Facebook or by some emails, it was surprising to experience first hand how nice they were “in person”, including Ueli, Daniel or the “boss” Philip (born to fly and win :-) ), just to name only three from EU. Same applies to everyone else including SA team Johan and Chris, with their BS1's.

About the contest itself, the first day was dedicated to 1:3 and SLS, so we spent most of the day building a box for the Skywalker in order to bring it on our flight back home safely. We could not see much of the activity outdoors, which would have teached us quite a few things about the contest rules and internal how to do things... as beginners we had to commit some errors and learn from them. On the other side we could witness how Ueli's and Walter's wives were cooking an absolute first class Turkish dinner for ll of us, which was an absolute highlight that day.

Our first day was “lost” ; Paco did a good flight but broke some rules, so we got a 0 and some unvaluable lessons for the future; on my side I had an elevator servo broken and a few more misshaps, so Skywalker had a blank day, but survived a “near crash situation” due to lack of up elevator that day. Next day we did uneventful flights which gave us about 50% of final scores, and in this way we were very happy of all the learned lessons in our first contest. Next time we know more about the do and dont's and we may get better scores :-) … In any case we reached 100% our goals as our aim was to have a nice time, have all the possible fun and learn from the many experienced pilots present at the event. We had real fun all and every day, and will never forget the hard laughs during the full 15 round flight (in spanish “cachondeo”) as it was unbelivable with Stephan also having fun while he looked at our tablet over the shoulder and joining the fun. We learned also much from almost everyone, some were more shy in sharing “secrets” others were surprisingly open and helpful like Philip, Walter or Ueli.

To see both in the ground and flying all the models, AN66, Quintus(es), Arcus, ASW22, BS1, just to name a few, all the frenetic activity by the tugs; the low thermal fights for another round, the group thermalling with or without local eagles (sometimes crowded thermals), the groups racing well up below and “through” the clouds was priceless... Regarding Sport Class, it was almost a “bi-model” class with Sharks and Skywalkers, some of them shared to make it more interesting as more teams could join the fun. Every day received us with different weather conditions after the usual mediterranean night thunderstorm; every day was flyable with sometimes demanding conditions which made it most challenging to get this extra round into the pocket, but always rewarded us with a smile after landing. The field itself is very well laid up and safe and club facilities area joy to use, nothing else to be desired to have a comfortable extended flying time; kudos MFR and Club del Ebre Team!

We left on saturday (flying back sunday morning) after a full and perfect week at MFR, filled with good experiences, new friends (real and not virtual as usual), lots of flights and quite a good load of GPS Triangle “new to us” knowledge, also technical. Missed Christoph there, but next time we sure meet!

We are doubling the number of GPSers at home and also interest is growing in Spain mainland, it would not be strange to see some new faces in coming events; nice people and with the will to do it well. We found strong interest among some Spanish visitors at Tortosa; let's wish them luck and last weekend a Basque friend came to visit us to the Canary Islands to gather technical info and witnessed a couple of good enough flights so as to recharge his “GPS Batteries”

Last, but not least, Thanks Ueli and everybody involved in giving us a most enjoyable week of flights and friendship! Will not be the last one :-) 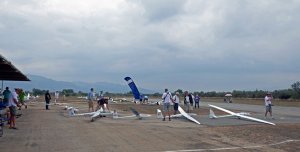 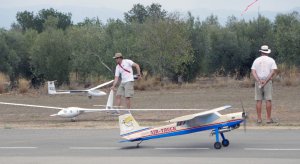 There is a non-ending activity 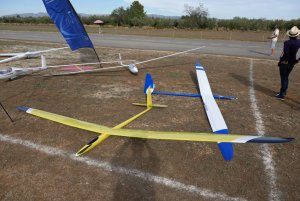 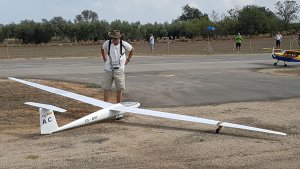 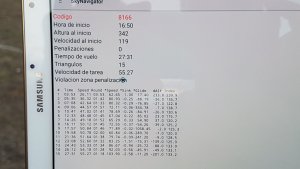 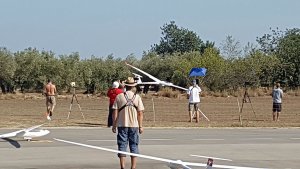 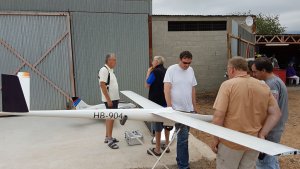 Philip Kolb and his "other" beloved "baby" 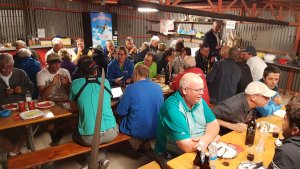 A good place to share friendship and "charge batteries" 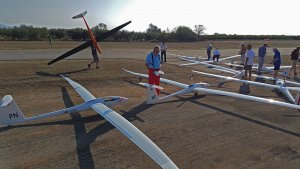 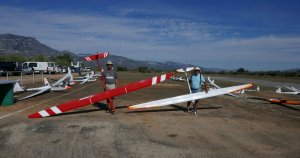 A Skywalker and a Thermik 3XL from the Canaries :-) 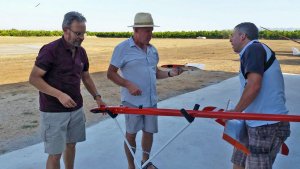 Helpful people in every aspect! .... Thanks 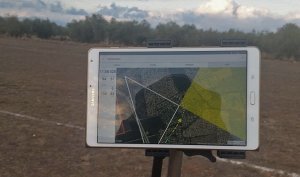 Just in the middle of the real FUN 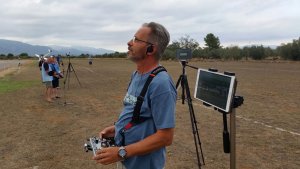